I am Peter Weber, a freelance sports photographer. 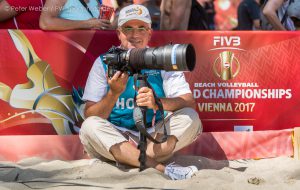 In 2005 I bought a new camera, my first digital SLR, the Nikon D70.  After some test at home I wanted to test my camera. I searched for an event an found a small tennis tournament for young players in Oberkirch (GER). There I got some very good pictures of Andrea Petkovic. She was in this time at the beginning of her career.

Excited about these pictures I searched for new events. So I started to take photos at beach volleyball and athletics events in Baden-Württemberg (south-west Germany)  also in Switzerland.
In 2007 I started my homepage PW-Sportphoto.de
Starting at smaller regional events, I moved on to more professional equipment (D2X, followed by D3, D3s and D5).
Also I moved up to bigger international events, mainly in beach-volleyball. In the last years I visited World Championships, European Championships, FIVB World Tour,  Majors Series, Word Tour Finals and the German Beach Tour.
In end of 2017 I decided to rework my Homepage, closing most parts of my photo galleries and change to a photo news blog.